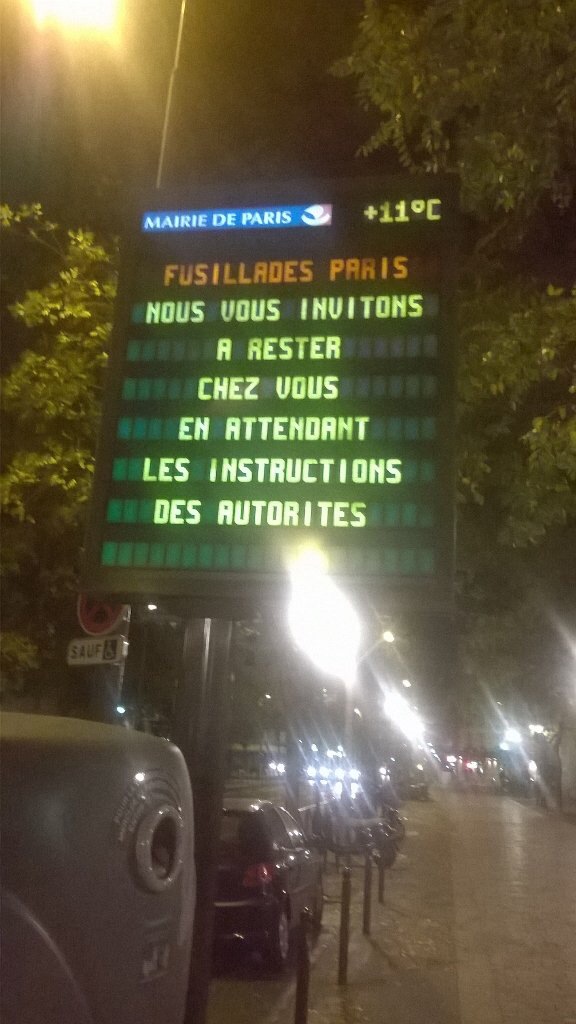 Fraternity is part of the motto of the French Republic. Consequently, the hashtag #PorteOuverte or #DoorsOpen was started soon after the attacks, by Parisians who took in neighbours who couldn’t go back home because of the troubles. We were also touched by the generosity and goodwill abroad as well as at home when we saw many people writing on Twitter ‘#JeSuisParis’.

There was never a question in the mind of French people that Islamic State was responsible for the murders which occurred near places with names symbolically charged : Place de la Nation, Place de la Republique, and the Stade de France, which embodies the pride of a multicultural country.

People say that these violent attacks represent a human rights violation, and pose a threat to a free way of life, to La République, La démocratie. Parisian people are deeply troubled by this disaster. But the most worrying thing is that they cannot tell what they really feel and think today. After the Charlie Hebdo Attack, we could easily identify the target: freedom of speech. The shooting had only one symbolical dimension.

Now, people wonder whether it’s a declaration of war. « François Hollande has shut the frontiers, that’s a good thing for peace », one old lady told me. She lived in Paris as a child in World War Two.
The French Interior Ministry launched a web site where Parisians can give testimony about the events they have experienced. The purpose is to avoid the spread of false rumours, that might add to the hate and amplify the crisis.

So will there be a drift toward Marine Le Pen and the far right Front National? Léa, a young hipster, dismisses such an theory with an authoritative air. It can’t happen in Paris, she believes. ‘In the provinces, maybe,’ she says, ‘where fear is heightened in an atmosphere that is anything but calm, even though people are far from the bloodshed.’

Parisians I meet seem to agree with the French media, who say that terrorism should not be associated with any particular nationality, civilization, religion or ethnic group.

« The Republic is not for the party Les Républicains (a centre right party led by former French president Nicolas Sarkozy), and the Front National has no monopoly of the Nation, » one man tells me, who fears that peace and unity are eroding.

So, November 13 is not like January 7, when Charlie Hebdo was attacked, and people spent weeks lecturing each other on religious fundamentalism and freedom of the press. Today, French people are worn out. When I ask them what these attacks could mean, most of them answer that all they are doing is waiting to hear news about relatives or friends. People are trying to find each other using the internet, when what they really need to do is sit in a café, giving hugs, and drinking a glass of wine with their friends. Today, Parisians just needs to be Paris again.